» The collagist René Apallec (born in Normandy in 1898) is said to have been a nurse in the plastic surgery medical section during the Great War. This experience seems to have inspired the 200 disfigured portraits of generals and marshals that make up his series “Broken faces”, developed shortly after the fighting ended. With this series, the artist sought to denounce the absurdity of war, to avenge the real trauma of facial disfigurement, and perhaps also to free himself from his own obsession. Hidden in his lifetime, these wrecked and reconstructed portraits are now beginning to acquire true national and international recognition. « 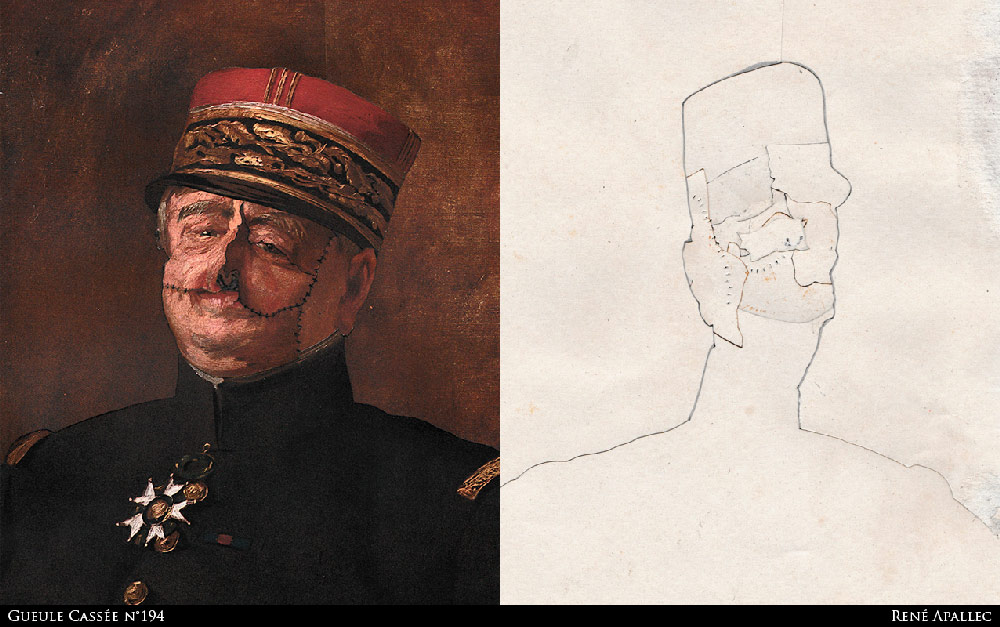 With a deliberate physical gesture but surgical precision, Apallec cuts into the fancily portrayed portraits of the Generals which he extracts from the original magazines. He then re-assembles the faces with delicate sutures to reveal newly juxtapositioned and distorted faces of the same Generals, effectively reinterpreting the face of war. Despite the suggestion of horrific injury the faces have an air of defiant pride; other interpretations become comical caricatures, bluntly suggesting stupidity and ignorance. Others suggest shattered stoicism and in the case of a rare relief the expressed pain becomes excruciating. Symbolic of the inhumane demands of a war machine, each face portrays the conflict of an emotional state in the scramble for self-preservation.

By re-facing the heroic images with the grimaces he revives the memory and haunting reality of the consequences of the actions of these men. Apallec refers to the specifically frequent facial injuries inflicted by modern warfare, which spurred the frenzied attempts of facial reconstructive surgeons to pioneer restoration of the face, as a symbol for hope and return to normality. Mirroring the huge numbers of killed and injured soldiers, the artist produces close to a hundred Gueules Cassées collages exclusively from portraits of Military leaders, questioning their wisdom in a most subtle manner. As it was well noted by the common soldier going over the trenches, it was not the generals’ faces that normally got shot to pieces.